An antiquated ritual, it involves the prospective groom and bride along with the elders in the family sitting in the presence of the priest who after establishing that the couple are not close relatives or share the same gotra sets the date for the wedding.

On an auspicious day the elders of the groom's side go to bless the bride and vice versa, by sprinkling husked rice and trefoil on their heads and giving them gold ornaments. It is a kind of acceptance of the boy and the girl on both sides.Equivalent of an engagement ceremony, the Ashirbaad ceremony takes place two- three days before the wedding date. For this ceremony, first the groom's family (excluding the groom) visit the bride's home and shower her with blessings as well as with costly presents, usually in the presence of a priest who places an idol of Bhagwan Narayan in the front. Later, the bride's family blesses the groom in his house and gifts him a ring, gold buttons and a watch.

A bachelorette party for the bride before the D-day thrown by relatives or friends. It signifies their approval as well, and also encourages community feeling.The following day,i.e.,the second day of the bride at her new home is celebrated as Bou Bhaat as on this day,she serves Rice with Ghee to all her in-laws at lunch.The evening is celebrated as a reception party,where all the distant relatives along with the close ones from the groom's side are invited and introduced to the bride.The bride's family members 'Konyajatri' also attend the reception with 'tatwo'(gtifts of clothes,sweetmeats, jewellery,and all other essentials for the bride and her in-laws).A grand feast is carried out called 'Preetibhoj'- It is a gala dinner to introduce the Bride to the society and the whole of the family. In the old days the dinner was all prepared by the family themselves. Sweet was made at home by 'Vien'. Friends and neighbors used to volunteer to distribute the food, which was usually done on banana leaves.But now the Catering Service has taken over the whole initiative.Ai Buddo Bhaat refers to the last meal that the maiden partakes of in her own house before she is married off. A joyous occasion, it calls for a mini-feast where the bride's extended family and close friends join in the celebrations and wish her all the best. The Ai Buddo Bhaat feast consists of typically Bengali fare such as rice, fish, luchis (puri), vegetable preparations and sweets such as payash, rasgullas etc. This ritual takes place in the home of the groom also. Conversely, sometimes close friends and relatives invite the would-be groom/bride to their house for Al Buddo Bhaat where all their favorite dishes are prepared and they usually receive gifts. 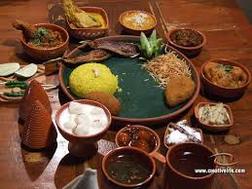 It begins with the Nanimukh ceremony,when the eldest male member of the family pays tribute to the deceased male ancestors,through an elaborate puja,requesting their holy spirits to bless the couple to-be. Nanimukh is a prayer where by the family take the blessings of the forefathers who are more alive. This is followed by the turmeric ceremonies or gaye holud take place before the wedding ceremony. There is one turmeric ceremony for the bride and one for the groom. For the bride's gaye holud, the groom's family - except the groom himself - go in procession to the bride's home. They carry with them the bride's wedding outfit, wedding decoration including turmeric paste, sweetmeats and gifts. They also take a large Rohu fish decorated as a bride. After the 'yellowing ceremony',the bride and groom are bathed by the water that the women had fetched from Ganga early that morning.There are local variations on this tradition, such as the number of fish, the party responsible for cooking the fish and time the fish is taken to the groom's family. The procession traditionally centers on the female relative and friends of bride,and the paste is prepared by five married women called 'Eyo-stree',and they are traditionally all in matching clothes, mostly orange in colour.The bride is seated on a sheel-nora, and the women walk encircling her showering ganga waters upon her. The turmeric paste is applied by the bride's friends to her body. This is said to soften the skin, but also colours her with the distinctive yellow hue that gives its name to this ceremony. The sweets are then fed to the bride by all involved, piece by piece. There is, of course, a feast for the guests.Married women stain each other with the turmeric paste.A ceremony in which five or seven married women of the household grind turmeric with mortar and pestle and anoint the bride with turmeric paste. This brightens up the bride's complexion and makes her skin glow.

At dawn on the day of marriage seven married ladies adorn the bride's hands with the traditional bangles Shakha and Paula - one pair of red and one pair of white bangles, and feed her a meal of curd and rice, the only meal for the day.Before sunrise,both the bride and groom are fed a mixture of sweets,doi(curd)and khoi since they would be fasting the whole day until marriage.After this,women relatives of both families visit their nearby water-bodies,preferably the Ganga river to fetch water to be used for the rituals and also to invite Goddess Ganga to the wedding,and act as a witness.

Boijotri refers to the ritual where the bride's maternal uncle or brother comes to pick up the groom and escorts him to the wedding venue. The groom's family members follow behind him.The members of the groom's house as well as his friends dress in their best attire and journey to the bride's house where the wedding takes place.

When the bor jatri reaches the bride's place, usually the mother of the bride along with other members come out to welcome the groom and his family by showing the holy earthen lamp, sprinkling trefoil, and husked rice placed on a bamboo winnow (kula). Then they are served sweets and drinks. 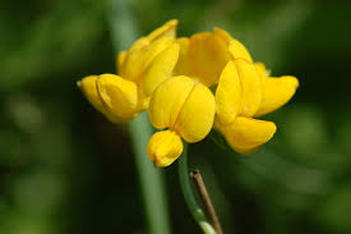 As the groom arrives at the wedding venue, women from the bride's side welcome him with ooulu, in which they simultaneously move their tongues and beat their mouths with an open palm. Then the bride's mother receives the groom at the entrance with the boron dala that contains a lamp, honey, yogurt, and betel leaves. She applies a tika of sandalwood on the groom's forehead and then on the ground. After the process is repeated three times, the groom is presented with a shawl and a dhoti and escorted to the mandap.
After the groom is seated at the chadnatolla (wedding altar and canopy) - thesanctum sanctorum where only the groom, bride and the priest takes their place, the groom is offered new clothes by the person who is to do the sampradaan - a kind of gift to the boy from the girl's side.

The bride, usually seated on a low wooden stool called pidi is lifted by her brothers and is taken round the groom in seven complete circles. The significance is they are winded up securely to each other.

After the circles are completed, still sitting high on the piri, the bride and the groom exchange garlands of fragrant flowers thrice. This is the first step in which they accept each other

After garlanding one another the bride and the groom are made to look at each other in front of all the assembled invitees. This exchange of loving glance is to initiate them to be together officially by the society.

The bride then takes her place at the chadnatolla where an elderly male member of the bride's family hands her over to the groom and the couple's hands are bound by the sacred thread amidst recital of Vedic chants and are placed on the mangal ghot - a brass pitcher filled with water that is covered with mango leaves attached to one twig and a green coconut placed on it. 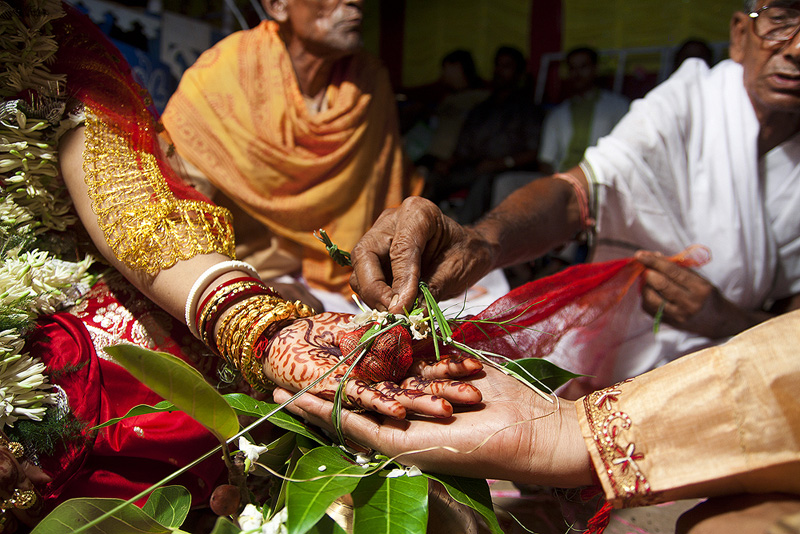 The bride and groom sit in front of the sacred fire and chant mantras after the priest.Agni, the fire god is made the divine witness to the marriage. where the couple walks around the fire seven times. Then they offer Anjali to the fire by giving offerings of puffed rice. The wedding is finally culminated with the Sindoor Dan where the groom applies vermilion to the bride's hair parting. Then the groom offers the bride a new sari with which she covers her head. Officially married, they now touch the feet of all the elders to seek their blessings. 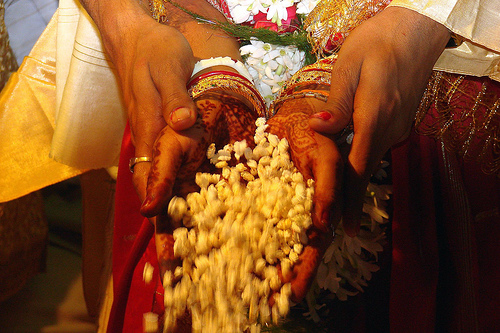 An offering to the fire is made. The bride's brother puts puffed rice (khoi) in the hands of the bride, and the groom standing close to her holds her hands from the back and extends their arms forward. They then pour the offering into the fire together.

Once again seated at their respective places in chadnatolla the groom applies sindoor or vermilion (a symbol of marriage worn by Hindu women thereafter) on the bride's hair-parting. The bride then covers her head with a new sari offered by the groom asghomta or veil. 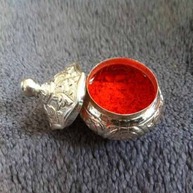 This is a farewell - mixed moment of joy and sorrow as the bride is bid adieu with blessings of her parents and relatives to start a new life with her beau.

After the couple reaches the groom's house and the initial welcome ceremony is over they are separated for the night, probably to get a refreshing sleep and prepare for the next day's final wedding ceremony.

Bou Baran refers to the formal reception accorded to the bride as she steps into her husband's home. As their vehicle comes to a stop in front of the house, the groom's elder brother's wife holds a plate containing dye and milk under the bride's feet. Having imprinted the soles of her feet thus, she leads her by the arm into the house. The elders of the house bless the newlyweds. Amidst loud ringing of bells and blowing of conch shells the groom puts an iron bangle on to his bride's left arm.

Bou Bhat signifies the first time that the bride serves food, usually delicious rice preparations to the family elders and her meal in her new home. At this point, the husband proffers a plate full of food, along with a new sari as an affirmation that from now he is responsible for all her needs- food, shelter and clothing.

The girl cooks and serves all the members of her husband's family. A banquet is held to treat the guests who lavish gifts on the new bride.

In the flower bed ceremony, the bride wears a lot of floral ornaments presented by the bride's family, and their marriage bed is decorated with flowers by the groom's family. This is the night of consummation.The couple is adorned with flowers and are left together alone in their room to enjoy conjugal bliss on a bed laid with flowers.

Eight days after marriage, the couple visits the bride's house and spends three nights there. It is accompanied by relentless feasting, and opening of the 'Gatbandhan' that had been tied on their day of marriage.

Among the Bengali Hindus of Sylheti origin, this ritual is known as "Fira-jatra". 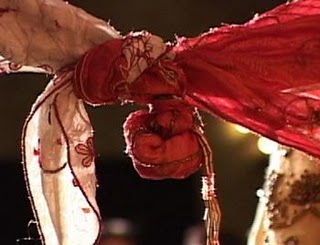 This is a ceremony that is conducted when the newlyweds visit the bride's house for the first time after the wedding. The thread that was tied by the Purohit (priest) on the bride's wrist during the wedding rituals is cut during this ritual. Conch shells are blown to the accompaniment of ululation to mark the auspicious moment